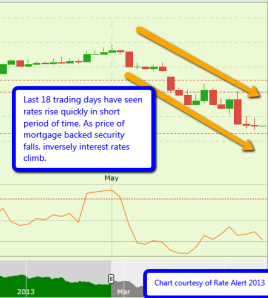 The unrelenting selling in the MBS markets has gotten a bit out of hand, and has a panicked feel. This may have something to do with the Fed, who suggests that the present quantitative easing (QE)  program may be modified in the near future. This is not a surprise as Fed chairman Ben Bernanke said, at some point the Fed would begin exiting, likely inch by inch but obviously not in one fell swoop as the market decline over past few weeks seems to imply (see chart).

Diverse opinions within the FOMC added to the impasse over QE, as one member advocated for immediate tapering of the QE program, while another proposed expanding QE purchases.

The FOMC noted a number of challenges including the national unemployment rate of 7.60 percent at the end of March, that private sector hiring plans were “subdued,” and that jobless claims had trended up during the inter-meeting period.  Among numerous economic positive statistics cited, the Fed noted that consumer spending improved and was driven by higher automotive sales and a drop in fuel prices.

The Fed predicted modest inflation over the medium term, and expected inflation to remain subdued until 2015. The Fed will maintain its benchmarks for adjusting the Federal Funds Rate and QE based on the national unemployment rate reaching 6.50 percent and the inflation rate reaching 2.00 percent.

The FOMC characterized the improving housing market as responsible for economic improvements for related businesses, but also acknowledged that increasing demand for housing was being caused by low inventories of available homes rather than buyer enthusiasm alone.

While the FOMC members did not agree on how or if to revise their current QE policy, it seems likely that the next meeting will bring increased scrutiny of QE and its impact on current economic conditions.

In my professional opinion, I am advising my clients to lock if they can. If they feel the necessity to float, do so cautiously and lock on any market improvement in rates. At this point, with an over heating stock market and large spikes in rates, I would say wait for the correction – it’s coming. BUT, every model we use is bearish (rate will continue to rise) and until that changes regardless of my personal hope for a correction for the better, we have to treat the market as it is presently. Presently the markets are filled with uncertainty and panic related actions, whether or not it is correct is secondary to the immediate sentiment.

One thought on “Should I Lock Or Float This Week? – Fed Minutes Expose Rising Interest Rate Risk” 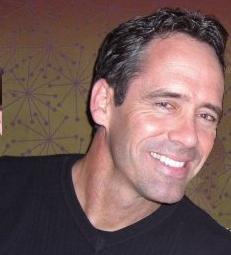