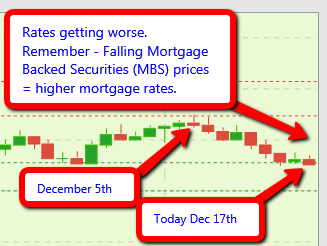 This so-called fiscal cliff is leaving mortgage rate shoppers shaking their heads? First, we are being told, if our congress allows us to fall over that cliff, it will equate to a monthly loss of $530, or more than $6000 per year, for many americans. If this were not enough to worry about, my clients shopping for homes, are also facing the uncertainty of what direction mortgage rates will move – Up? or Down? Last week, rates have started to creep up, and up.

76 new areas were added to the IMI list in December as compared to November. The geographic diversity the newly added markets suggests an overall improvement in the national economy.

The post-meeting press release after included the Fed’s commitment to hold the Fed Funds Rate near zero percent where it’s been since December 2008. However, the Fed announced a change to in its plans to raise the Fed Funds Rate from near-zero at a future date.

Previously, the Fed had said it would raise the Fed Funds Rate beginning in mid-2015. Now, the Fed says it will start to raise rates when the national unemployment rate reaches 6.5 percent.

Markets will continue to respond to Fiscal Cliff discussions, which ever way they go.